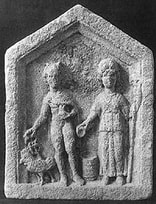 Rosmerta and Mercury
a carving from Roman Gloucester.
Mererid (‘Pearl’) , well-maiden and cup-bearer, how does her identity begin to take shape? Floods from springs or wells when their guardians are offended are the legendary origins of many lakes. These guardians are invariably female and it is sometimes stressed, as with the case of Mererid, that she is a maiden. Two words are used to convey this in the poem in The Black Book of Carmarthen. In one line she is referred to as ‘morvin’ (simply maiden), but in another line as ‘machteith’ which is also a term indicating a court office. Rachel Bromwich comments that “both interpretations should be borne in mind”. (1)

Ancient cities and other settlements often had magical as well as physical walls around them. Gateways through the walls could be physically sealed and locked but magical gateways needed magical seals or keys to open or shut them. The title ‘Pontifex Maximus’ (now inherited by the Pope) originally indicated one who was adept at bridging and sealing protective boundaries. The Vestal Virgins were an institution that was seen to protect Rome, the virginity of the vestals being an essential element in this. In earlier societies this function often inhered in a virgin deity. The virginity of Athene as protectress of Athens was stressed. Studies of the sources for Homer’s Iliad indicate that Troy was seen to be protected in this way and one of these relates that the prophetess Cassandra undid her girdle as the horse was brought through the city walls in a symbolic breaching of their magical protection. (2)

Could the same protective function apply to well maidens? Wells were often seen as gateways to the Otherworld and if these gateways were not properly protected the steady flow of blessed water might become a deluge, particularly if the guardian of the well ceases to be a virgin either by her own volition or by her violation. But Mererid is also a ‘cup-bearer’. Reading M. J. Enright’s elucidations (3) about the role of cup-bearers in Celtic and Germanic cultures and the proposed origins of their functions and identity in the goddess Rosmerta (the ‘great provider’) and the story of the virgin prophetess Veleda in Tacitus’ Germania; all  bring the picture into focus.
Rosmerta’s emblems are the cup, ladle and bucket. Her cup an emblem of plenty, proffered at the feast; in Gaul she is associated in at least once place with a sacred spring. In her continuing identity in the persons of cup bearers her role becomes differentiated and therefore ambiguous, particularly in later contexts when the religious significance may have been lost but the magical status still remained resonant. A cup bearer might be a maiden and hold an office as such at court but equally there might be an implied sexual element involved in what she represents associated with fertility. Enright says as part of his discussion of these elements, “We may therefore reiterate an argument made constantly in this study – that prophecy, sexuality and the offering of liquor were all part of the same mental construct for Celts and, perhaps, somewhat later, for Germans.” Where her maiden status is associated with protection, the loss of it also implies loss of protection. But it might in other contexts be associated with fertility and so becoming sexually active brings plenty. Her survival into later legends, folklore and story may emphasise only one or the other of these functions exclusively and so appear to be only about a single event such as an inundation or a symbolic offering of plenty by a cup bearer, though often the portrayal of these events retains an aura of something deeper.

What of Mererid? She is a well maiden whose function is to protect the well. She also bears the cup of plenty. So could her seduction or violation have removed the protection and so caused the flood? And could there be an underlying sense of fertility here too, the release of life-giving waters, but disguised in the story of a catastrophic inundation? There is a single word in the poem in The Black Book of Carmarthen :-‘cwyn’ – that has been alternatively translated ‘complaint’ and ‘feast’. Did she complain about what had happened to her or might we suppose that the offering of her cup as a feast has other implications? A mythological reading might include both possibilities simultaneously. Is she here the victim of a violation or an active participant in releasing the flood? We must remain in creative doubt and uncertainty about this question.
-*-
There are many stories of flowings from springs or wells to make lakes, or rushing to meet the sea to re-shape the coastline. There are also recurrent stories behind these legends, superficially of pride, arrogance, presumption, though this might mask a quest for knowledge and therefore power. Often the consequences are delayed and the flood comes after many generations (time for the otherworld deities is not our time). The legend of the drowning of Tyno Helig near the estuary of the River Conwy in North Wales is typical of the theme where a wicked ruler is told that his descendants will be punished for his deeds and so he thinks he has nothing to worry about, but seven generations later his lands are flooded during a feast and only the harper escapes drowning. This latter detail of the harper is also a common element in the stories. John Rhŷs thought that the theme of delayed punishment for evil deeds was a later development in these stories which originally involved something happening at a sacred well which causes it to overflow. (4)

Consider for instance, the story of Boann who looks into Nechtan’s Well of Wisdom which should only be visited by Nechtan and his cup-bearers. The well overflows and chases her all the way to the sea, thereby forming the River Boyne. In the story of the drowning of Cantre’r Gwaelod, or the lands of Gwyddno Garanhir, Mererid is herself a cup-bearer and a well-maiden, though the oblique nature of the verses which record this (probably originally contained in a prose saga which supplied more detail) means that the context is unclear.

Both the setting for Tyno Helig and that for Cantre’r Gwaelod are also settings for different surviving versions of the story of Taliesin. Think now of that harper who survives (or is re-born from) the flood. The story of Taliesin begins at Llyn Tegid, the location of another inundation legend which explains the formation of the lake near the town of Bala. This is where Gwion stirred Ceridwen’s cauldron. The River Dee (Dyfrdwy) which runs through the lake, has its own mythos naming its waters as sacred (~>). Gwion looked into, and tasted, the waters of this cauldron and there was an inundation. He gained wisdom just as Finn gained wisdom either by tasting the salmon from the Well of Wisdom or, in another story, tasting drops of water from an otherworld well.

In Gaul a god that the Romans called Mercurius – though he may not have had that name before the Romans conferred it – was partnered with Rosmerta, whose name could simply mean ‘The Great Provider’. Rosmerta had a site of devotion at a sacred spring in Gaul and is also commemorated in Bath, the site of the sacred springs of Sulis in Britain. One of her emblems is a bucket (cauldron?) and she is represented with Fortuna on one relief where the bucket could symbolise re-birth. A spring, a cauldron, a brew of otherworld wisdom, welling into our world. A cup-bearer, a well-maiden ~/~ the keeper of the cauldron, a hag. Are these two sides of the same coin, the turning of Fortuna’s wheel? When there is a flow from otherworld streams out of the well or the cauldron, who can catch the essential drops on the tongue, taste the salmon or gather the hazel nuts that have fallen into the the waters of the well?

Think of that harper, the survivor of the flood. Think of Taliesin, re-born from the waters into a weir in which salmon are caught. Think of others whose quest for knowledge transforms them into divine or inspired figures. Then consider that Mercurius, Rosmerta’s partner, may have been known in the lands that overlapped Gaul as Woden, and how a god, taking a different name for a different people, might do things differently, and yet still discover sources of wisdom, of inspiration, and how the mead of poetry from the Cup or Cauldron of Inspiration might be dispensed to the poets, the awenyddion, the drui, from whom the waters of the Cauldron flow as rivers of song.