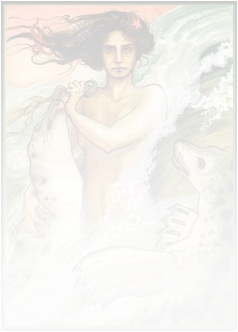 Ursilla was not happily married. And what she could not get from her husband, she sought elsewhere. No other man on the island would do. So she looked to the Selkie folk.

She went early one morning, to sit on a rock at the high-tide mark, and when the tide was washing against the rock, she shed seven tears and let them fall into the sea. This is what you must do if you wish to speak with the Selkie folk. Then, out of the grey light of the dawn over the sea, she saw the Selkie coming towards her through the waves. She spoke to him of her desire, her tongue freed by his unearthly beauty and his own direct manner.

He said he would visit her at the Seventh Stream of the spring tide, and he would come in human form. She came at the appointed time and he was there on the rocks before her with the waves washing at his heels. She went with him under the cliffs, hand in hand, her cold, hard beauty softening as they went and he gazed upon her with his eyes like wells of clear spring water.

It is said that, later, she had a child with webbed feet, though this is not confirmed. Nothing ever is where the Selkie folk are concerned. Did Ursilla walk, hand in hand, with a Selkie in human form? Did a seal man come from the sea to her? Certainly she sat on that rock and shed those tears. Certainly a seal’s head bobbed out of the water as she did so. But there the certainty ends. For that is how it is with the Selkie folk.

(A version of a folk tale from Orkney.)