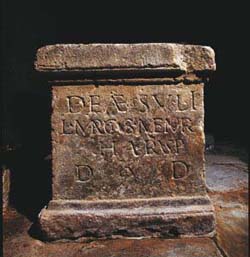 The Romans recognised the importance of the deity SULIS so built the baths and dedicated them to Sulis-Minerva, thereby uniting and important British deity with a major Roman goddess.

Miranda Aldhouse Green comments: "The shrine of Sulis Minerva at Bath provides a superb example of the conflation and hybidization of Roman and celtic religious beliefs and practices. On epigraphic dedications to the goddess where both Celtic and roman names are mentioned, that of the indigenous goddess, Sulis, is always put first, thereby emphasising that she was patroness of the spring and that her cult was of long-standing."  (*)

The prominence of the site is often cited as evidence both of the importance of water for the native Britons and also of the willingness of the Romans to adopt the deities of conquered peoples.

But another important Brythonic water deity, COVENTINA was not linked with a Roman goddess in this way, though she clearly had Romanized devotees in Britain and in Gaul. Her shrine at Carrawburgh (Brocolitia) on Hadrian's Wall was also built around a spring. But it was  more modest and in a  remote place. Here there seems to have been more of an emphasis on the worship of water as an emanation of divinity, or as a welling from the Otherworld, than specifically as a medium of healing or for bathing.

The remains of her spring are now barely visible beside a carefully excavated temple to Mithras. The well was dug into as part of a search for lead ore in the 19th century and more or less destroyed, though several devotional objects found there can now be seen in the nearby Chester's Museum.
​
But she remains, like clear water from a bubbling spring, a source, somewhere to return to, an unsullied stream flowing into the Romano-British myth river, but distinct. Though her spring is now no more than a muddy pool, each time I open my geode and pour water over the crystals she is present in the pool I have made for her. 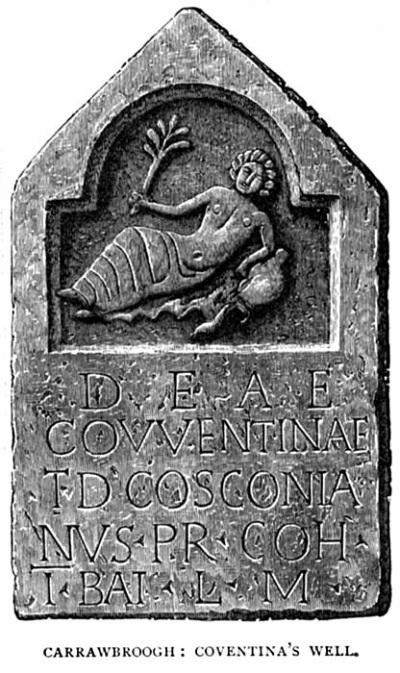 Coventina depicted as a water nymph in the Roman style but in a way that is more characteristic of native British depictions.