Mererid and the deluge 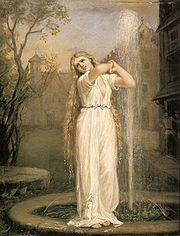 Mererid was a well maiden - she was the guardian of a well at the foot of the mountains, as they crept down to a wide low-lying plain with the sea beyond. The waters that fed the spring beneath the well came from the roots of the mountains, rising into the well in a steady stream, sweet and fresh as morning dew. Those that drank the water regularly felt its virtue in their daily lives, but many more came from far away to sample the water and carry some of it away with them. This was not begrudged as the stream running off from the well was always strong and clear and never failed even in the driest weather.

Mererid guarded her well with dedication, saying the right words of blessing to those who sampled the waters, addressing the water spirits at the appointed times and, sometimes, telling those who came what messages came to her on the rising stream. But one day some came who were not respectful of her office, who abused her in word and then in deed and left her, distraught, so the seal on the wellhead was undone and could not be put back.

The steady stream of the well became a rushing torrent, and the well shaft a fountain of gushing water which kept coming in pulse after pulse over the well surround and down to the lowlands below, spreading over the plain and drowning everything in its path. Houses, farms, woods and the sand dunes were soon all submerged so that now, the land is all under the sea and the well head is lapped by waves where a river has its estuary.

Sometimes, in the evening, when the light is fading and there is a grey mist over the sea, the sad lament of Mererid can be heard sighing over the waves. It is said that now she is one of the water spirits but that her human form has not quite left her and so she can at these times be seen indistinctly shimmering in the eddies of the river as it runs into the sea.