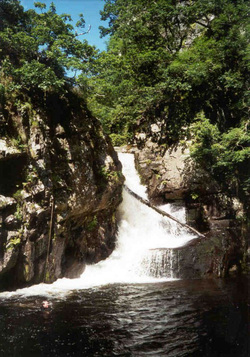 … and then we turned under the lee of the ridge and out into the open stretch of the valley. It's always a spectacular view and today we emerged into dramatic weather: iron-grey clouds were louring on the distant mountains, sheets of rain were being driven by the wind along the hills on the far side of the valley. We descended the steep slope through the rain and I felt completely at one with both the weather and the valley. As we approached the stone circle, in fact the eroded remains of a Bronze Age burial chamber, I reflected how little had changed in this place in all the centuries during which that erosion had taken place. It couldn't have looked very different then from now, the contours of rock, the slopes covered in remnant ancient oak woodland and the pasture above the gorge where the river runs through a torrent, containing these stones in their lonely isolation with no fence, information boards or access road apart from the indistinct footpath we were following.
We looped down to the torrent though dripping oaks and back up from the roaring waters by another path, emerging into fitful sunlight as the shower cleared and patches of blue sky showed behind clouds. Such days as these cement a relationship with a landscape, not as something to be looked at but as a place to be a part of, to live in, and to experience in
every mood so that there is no question of being put out by weather or changing conditions any more or less than with a partner's or friend's differing needs: you are there for them and they for you. So it is with these hills, these rivers, these woods and all the weather gods that express their changing moods here.

Then the next day I took a newly-made footpath along the same river, but now I followed it around the edge of the town where it meets the sea. It is much wider here, flowing more smoothly but with some swirls and eddies after the heavy rain. As I reached the harbour and watched the waters cascade for the last time down through the stepped descent into the enclosed haven where boats are moored away from the crash of waves on the other side of the harbour wall, I felt close to this river as I have to others. The waters that run over and through the earth in this part of the world run deep within me as they do to the deeps of the sea.