Cúchulainn, the Defending Rivers and the Healing Rivers 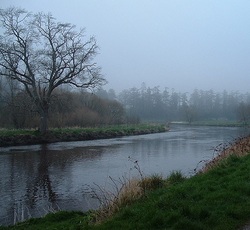 There are examples of rivers actively participating in the resistance to invasion of a particular land. For instance in the Irish epic The Táin , Ulster is being attacked by invaders from Connacht. We are told that

... the river Cronn rose up against them to the height of the treetops and they had to pass the night by the edge of the water. In the morning Medb ordered some of her followers across it. The famous warrior Ualu tried it. To cross the river he shouldered a big flagstone so that the water wouldn't force him backward. But the river overwhelmed him, stone and all, and he drowned.

[Cúchulainn continued to harass the army from across the river]

So they went along the river Cronn until they reached its source. They were crossing between the spring and the mountain summit when Medb called them back ....  Next day they travelled to the river Colptha. Recklessly they tried a crossing, but it too rose against them and bore off a hundred of their charioteers towards the sea. ...   After this they went across Glen Gatlaig, but the river Gatlaig rose up against them also.

(all the above quotes from Kinsella's translation)