Mermaids and may dew 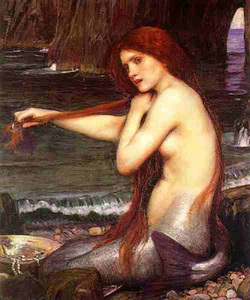 John Reid loved Helen Stuart, though she thought she could do better. But if she wouldn’t consider him, he would consider no other. So he bided his time.

There was a custom among the girls to go out early on Mayday morning to gather May Dew. John also rose early, before dawn, on that morning and watched the Sun rise by the Dropping Cave where wishes might be granted if you encountered the Mermaid.

As the morning filled with light, John heard an unearthly voice singing. It was coming from the rocks where the sea washed into the cave. So John went down into the back of the cave and followed the ledge to its entrance. There he saw her, her hair hanging down her back, and he was spellbound by her song and by the sight of her. He might have remained mesmerised but she was looking the other way or her spell might have made him cast himself into the rocky water to swim to her. But the thought of Helen gathering the May Dew saved him. He followed the ledge through the side of the cave and down onto the beach so that he could approach the Mermaid from the seaward side.
When she saw him her voice changed and the song near froze the blood in his veins. He held his ground for a moment to gain his resolve, then approached her.

“Man what with me?”, she said in a voice that was both enticing and repelling, so that he felt that he hovered briefly between and solid world and the water world, though he held on to the formula that the lore he had learned required when dealing with Mermaids. He replied:
“Wishes Three”

He asked that he would never be drowned at sea, as his father had been, and this was the traditional first wish, and in the Mermaid’s power to grant.
He asked that he would prosper in all his undertakings at sea. This, rather than the desire for specific wealth, was also traditional and might be influenced by the Mermaid’s powers.
The third wish should be unstated, but must have to do with water. So it was well that the gathering of May Dew by Helen was on his mind.
“Quit and have!”, she said, “And unbar my way to the sea”.

So John retreated and the waves washed over the rocks and she was away.
He climbed up onto the knoll above and across to the place known as Lovers Leap where he found Helen telling her friend about a strange dream, that she had been gathering the May Dew and had heard an unearthly song and seen John Reid on the beach below the knoll, and the words of the song spoke to her and the drops of dew turned into a shower of gold. As the dream ended she saw the Mermaid sliding through the waves of the sea.
Now John came to her through the mounds where primroses blossomed and spoke too of having seen the Mermaid. The last time she had been seen was when John’s father had drowned. So Helen was fearful, and she said, “Do not tell, for they thrive ill who carry tales from the Other World to this.”

Helen was so affected by the events of that morning that she allowed John to walk her home, and the bond was forged, and on the next May Day they were betrothed.
*
(adapted from: Scenes and Legends of the North of Scotland, Hugh Miller, Edinburgh 1872)